New year, new photos! I had quite a busy December between going to school, catching a cold, and finally going to many different events before and during the winter vacation. At our school the winter vacation started on the 23rd and lasted until January 5th. I took a little head start by going to Kyoto already on the 21st, because the flights were most convenient that way. But it seems winter vacation is only a real vacation for us exchange students, because I asked some students about how they spent their vacation, and most said to have worked part time jobs the whole time, or they spent the time doing their school projects. Sounds pretty tough!

Winter vacation is also a time to visit one’s family, and many of the students did that. Some have moved to Sendai from quite far, so they might not get to visit their childhood home too often. During the winter vacation I visited Kyoto, Kobe and Tokyo. I’ve been to Kyoto and Tokyo a couple times before, but Kobe was a first for me. Kobe seems quite international with it’s Chinatown and Western companies and stores. Kobe was one of the first cities to open it’s doors for trade with the Western countries back in the 19th century, and it still shows somehow. We mainly went there for a T-Square concert, which was held on Christmas eve at a place called Chicken George. Go figure. 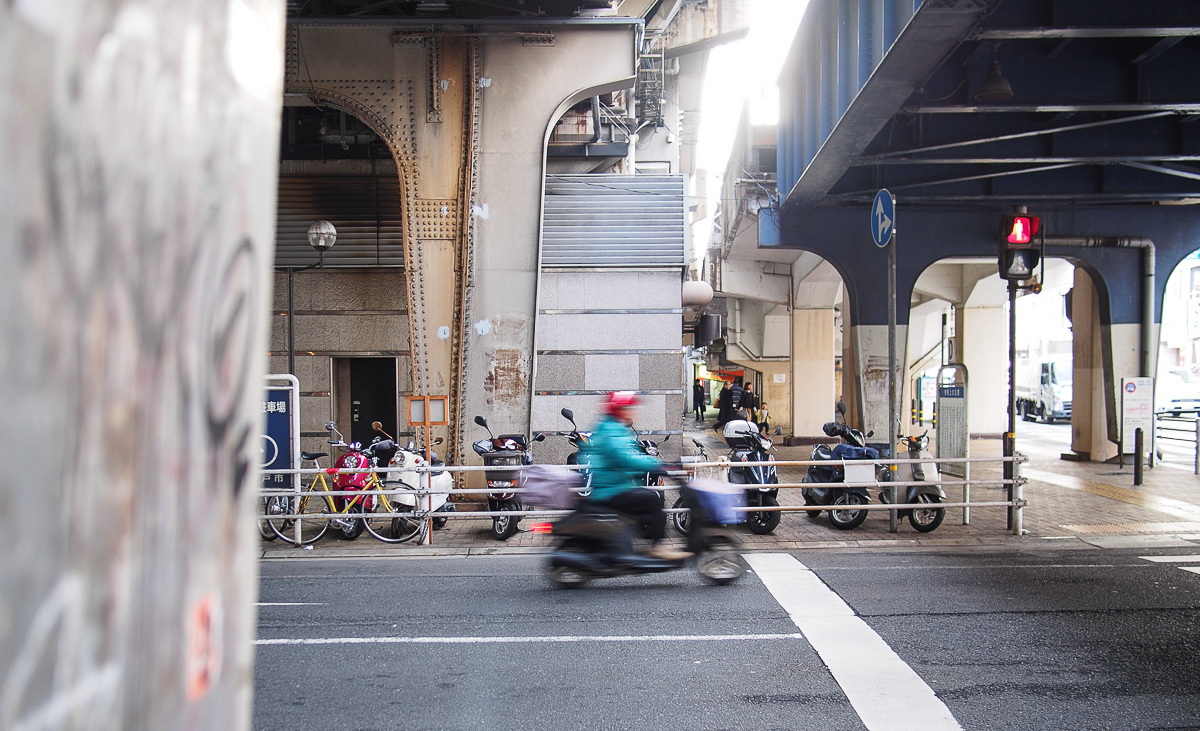 I feel scooters are quite popular in Japan, and there were many parked under the bridge near Sannomiya station. 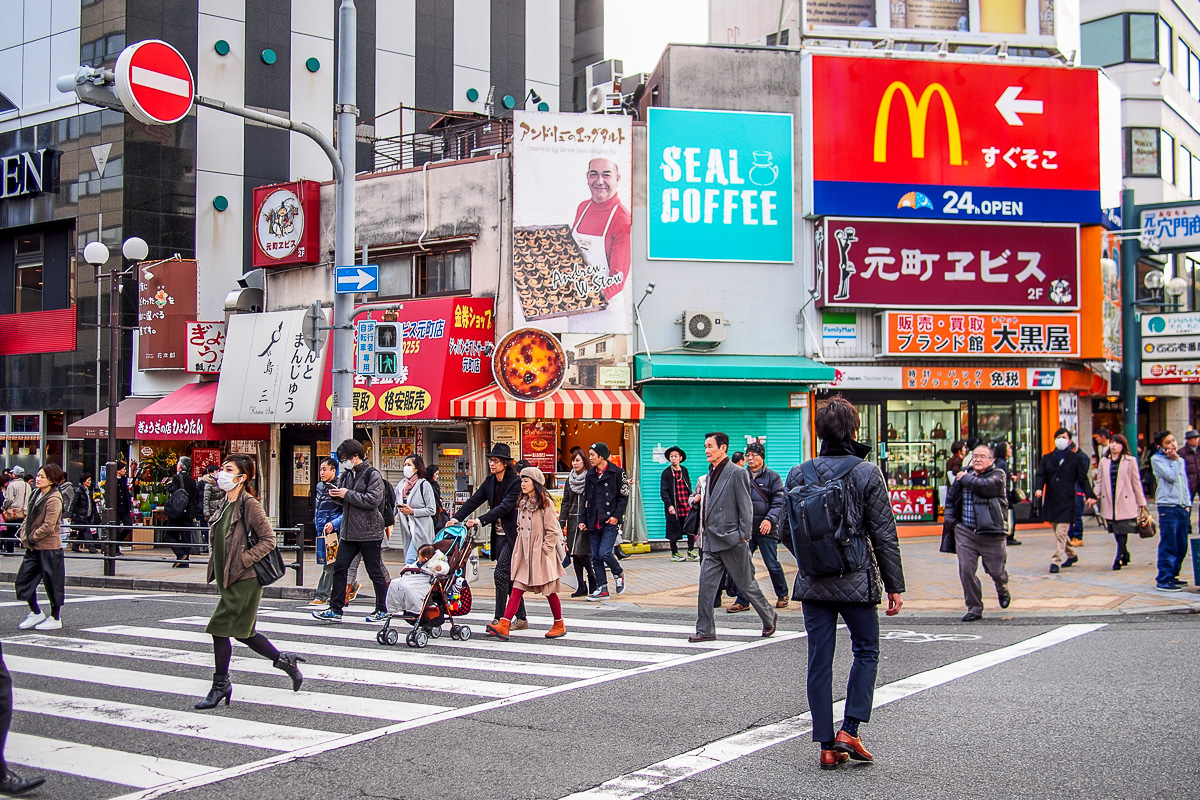 One of crossings near the railway station. 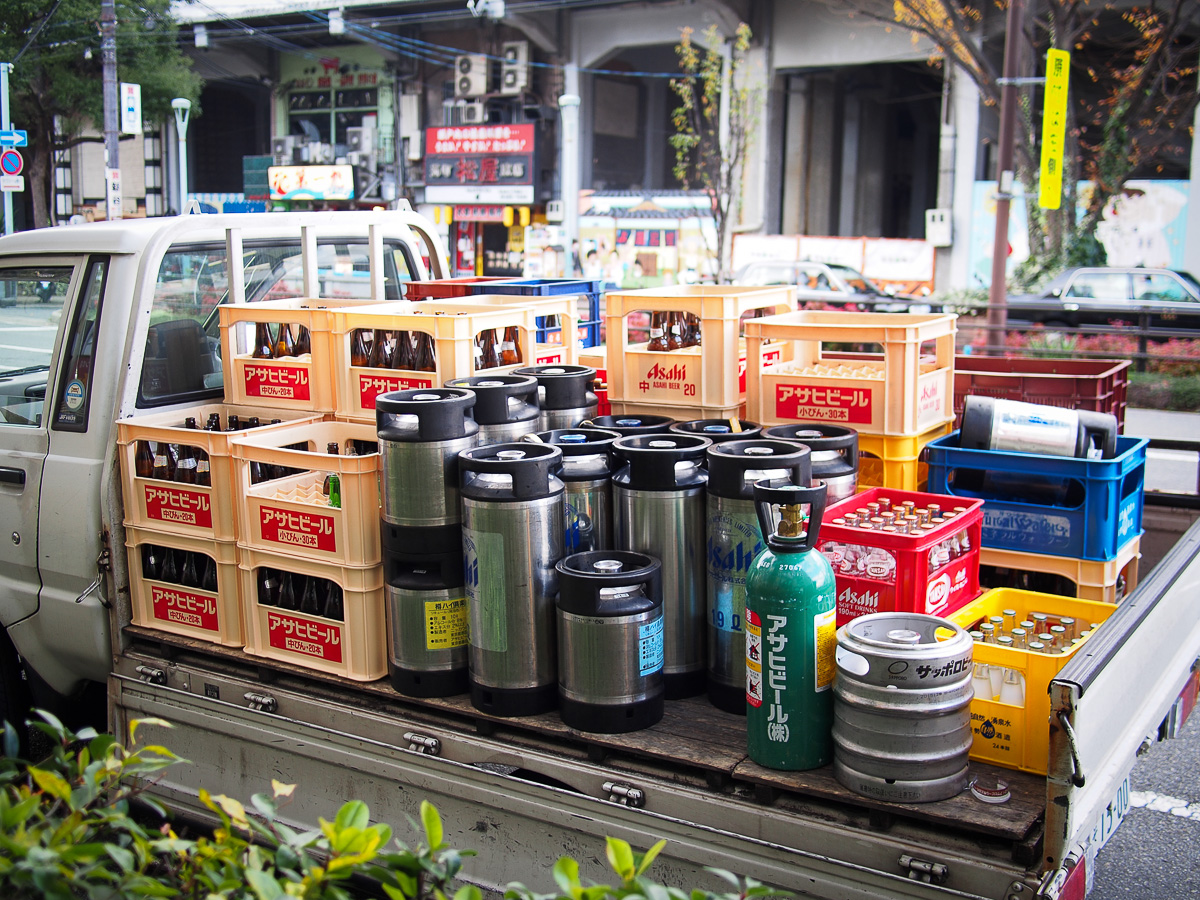 Beer kegs on a truck. In Japan they are taller as opposed to the ones in Finland, which are usually more flat and round. I hope I’m not the only one who finds stuff like this interesting. 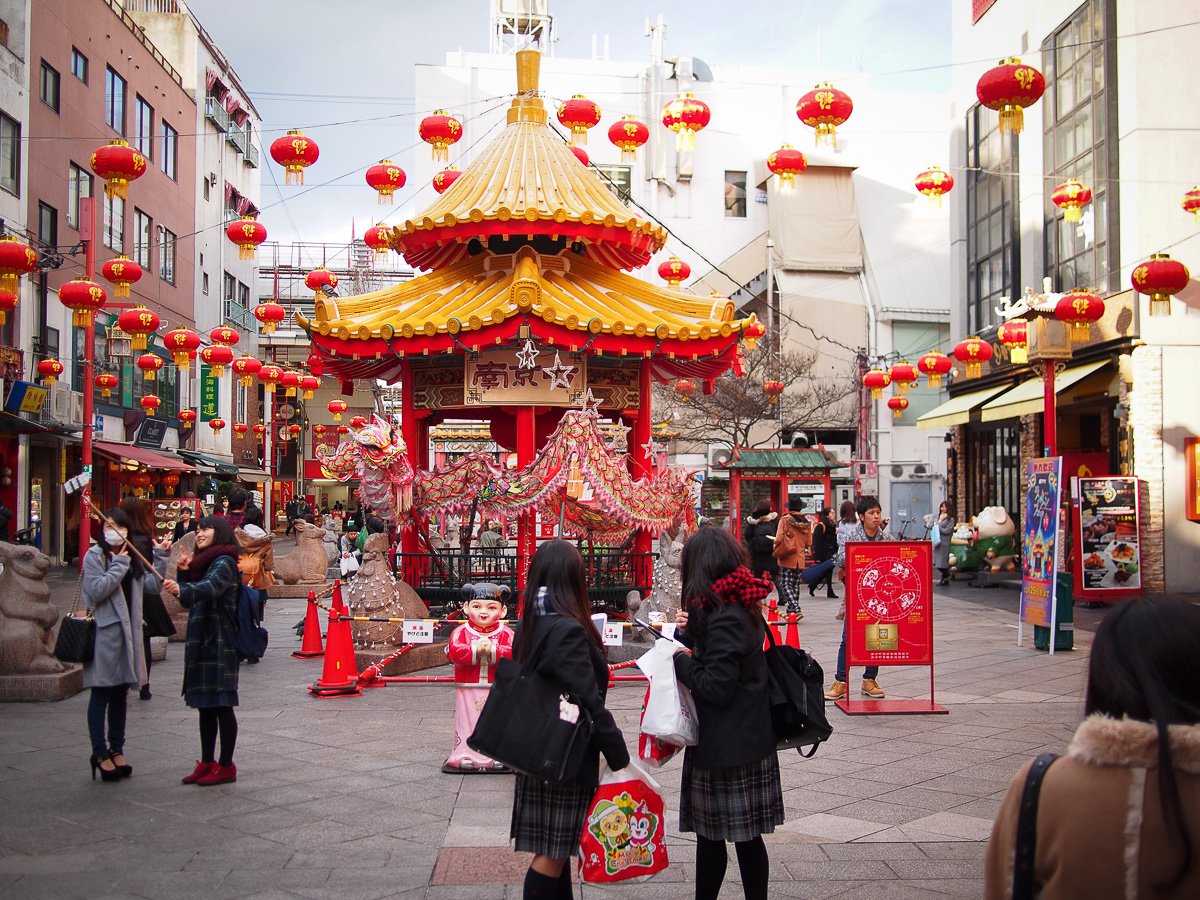 The main square in Kobe Chinatown. The Chinatown was actually somewhat smaller than I thought (smaller than the one in London, for example), consisting of only a few short streets. I liked the hanging lanterns, and this seemed to be the number one selfie spot. 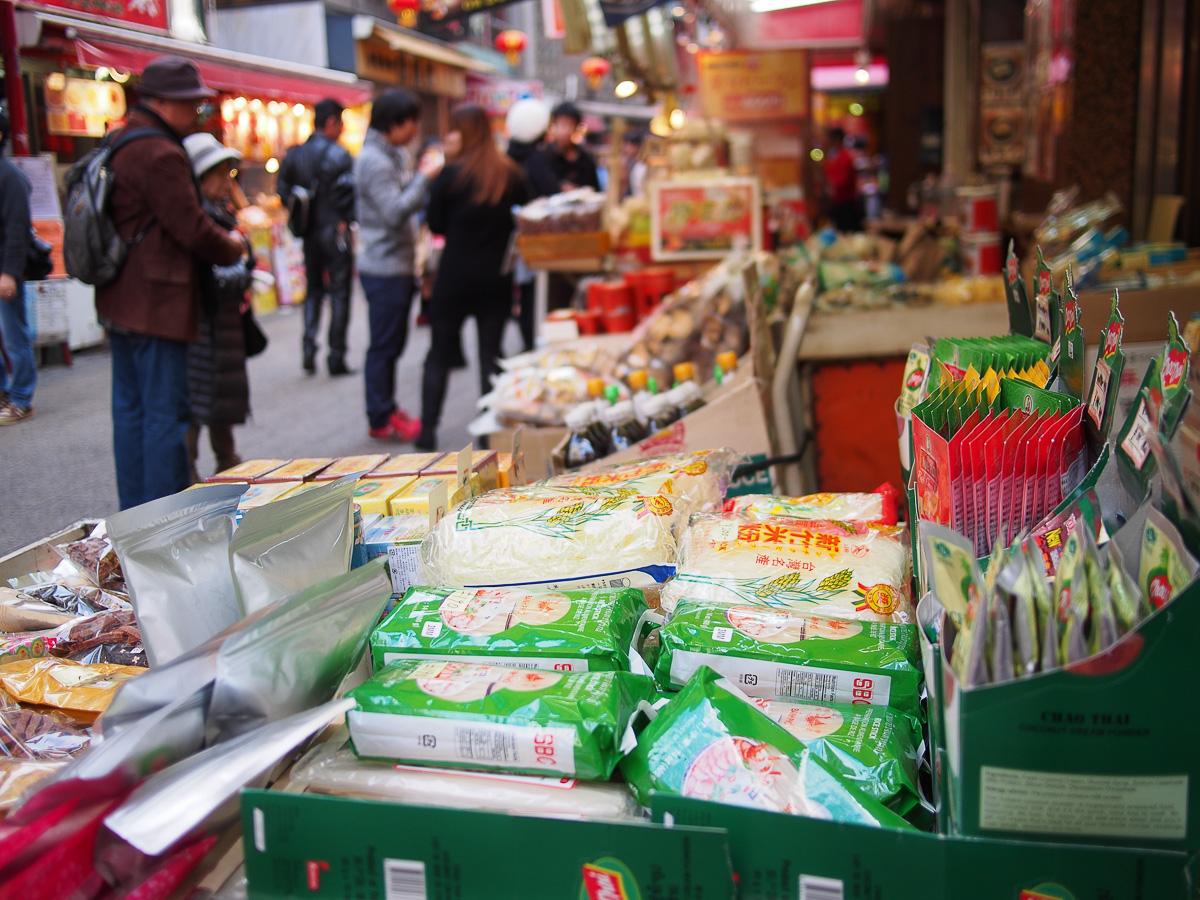 There were all kinds of Asian groceries for sale, and a nice looking Chinese tea store. I only bought some cheap Pu-erh tea, because well, I didn’t exactly feel like stocking up on 20 kg bags of rice at the moment. 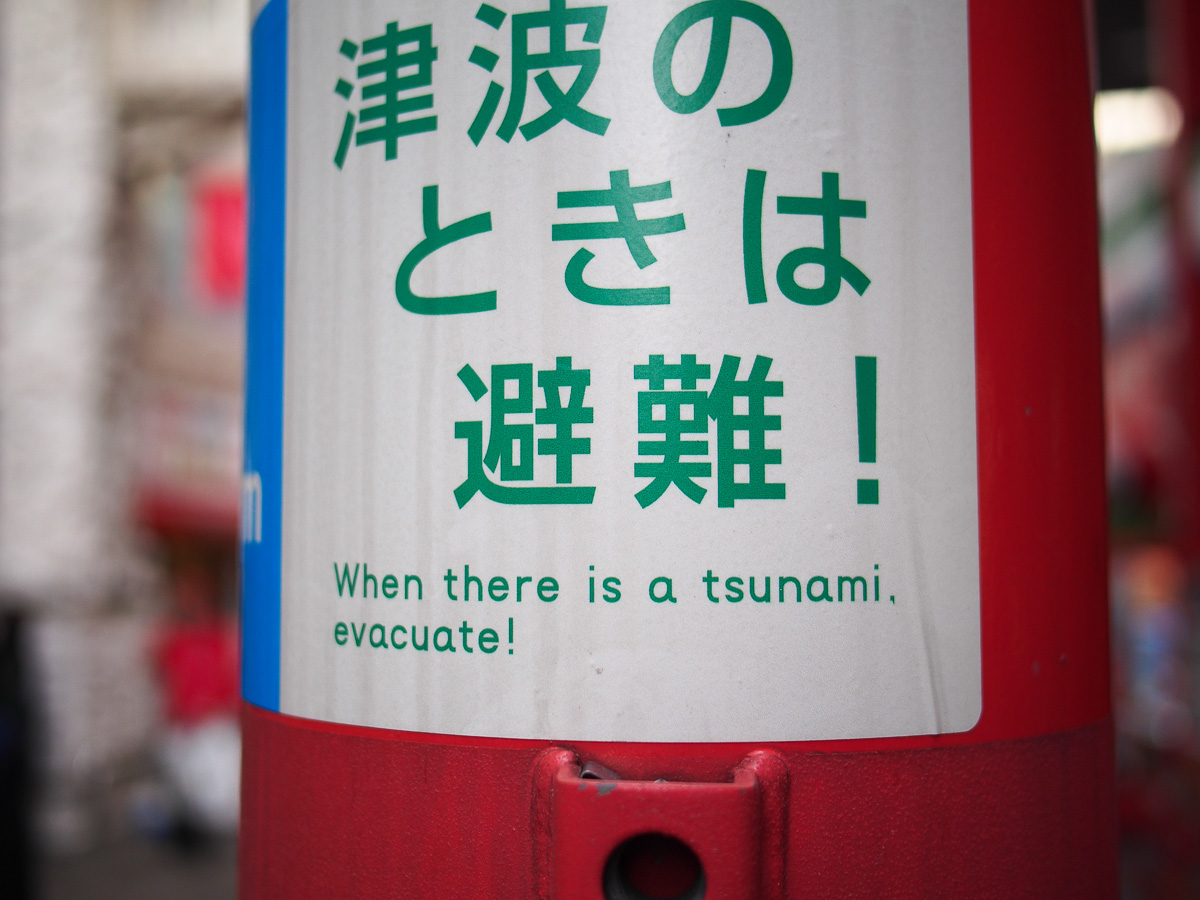 Luckily there wasnt’t one when we were there! These were spread around the downtown area on posts like this. 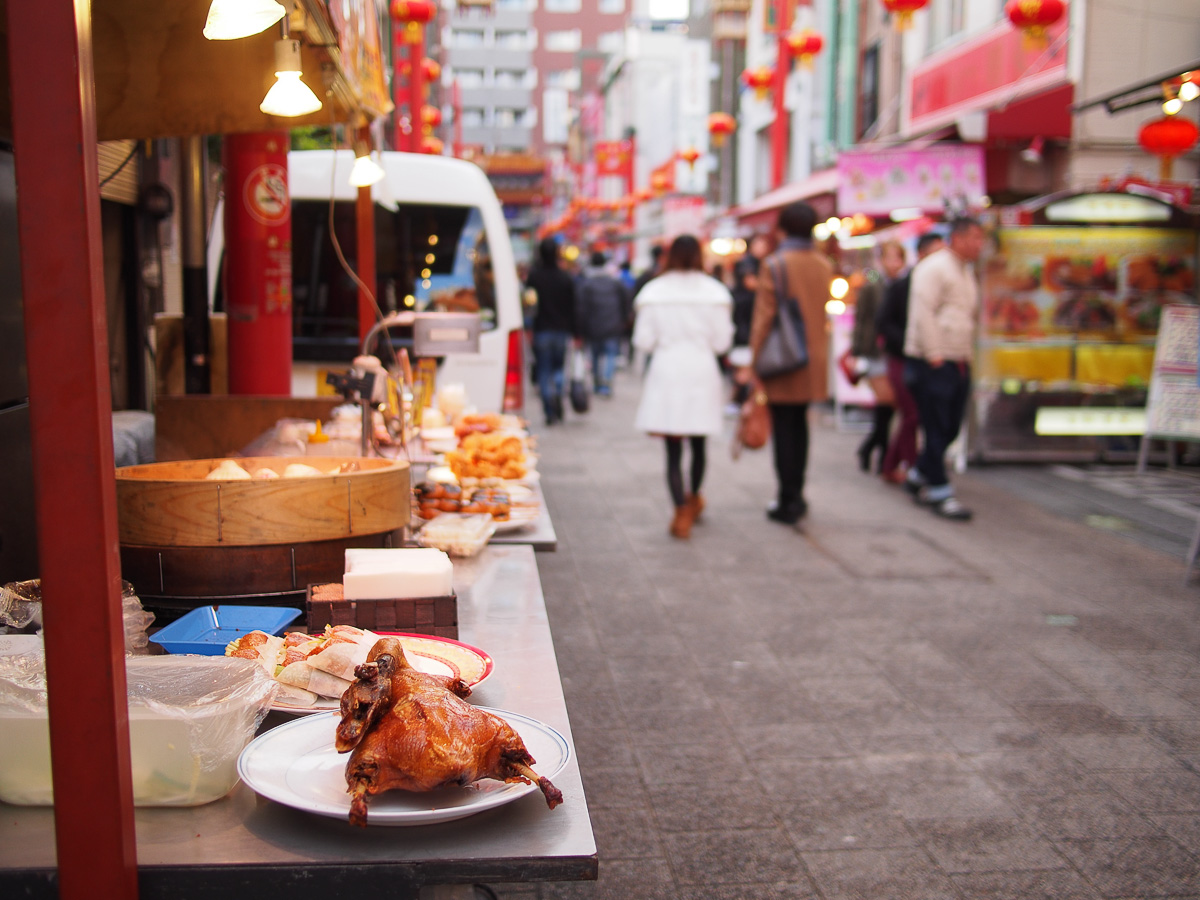 Roasted chicken. There were no staff at this stall. 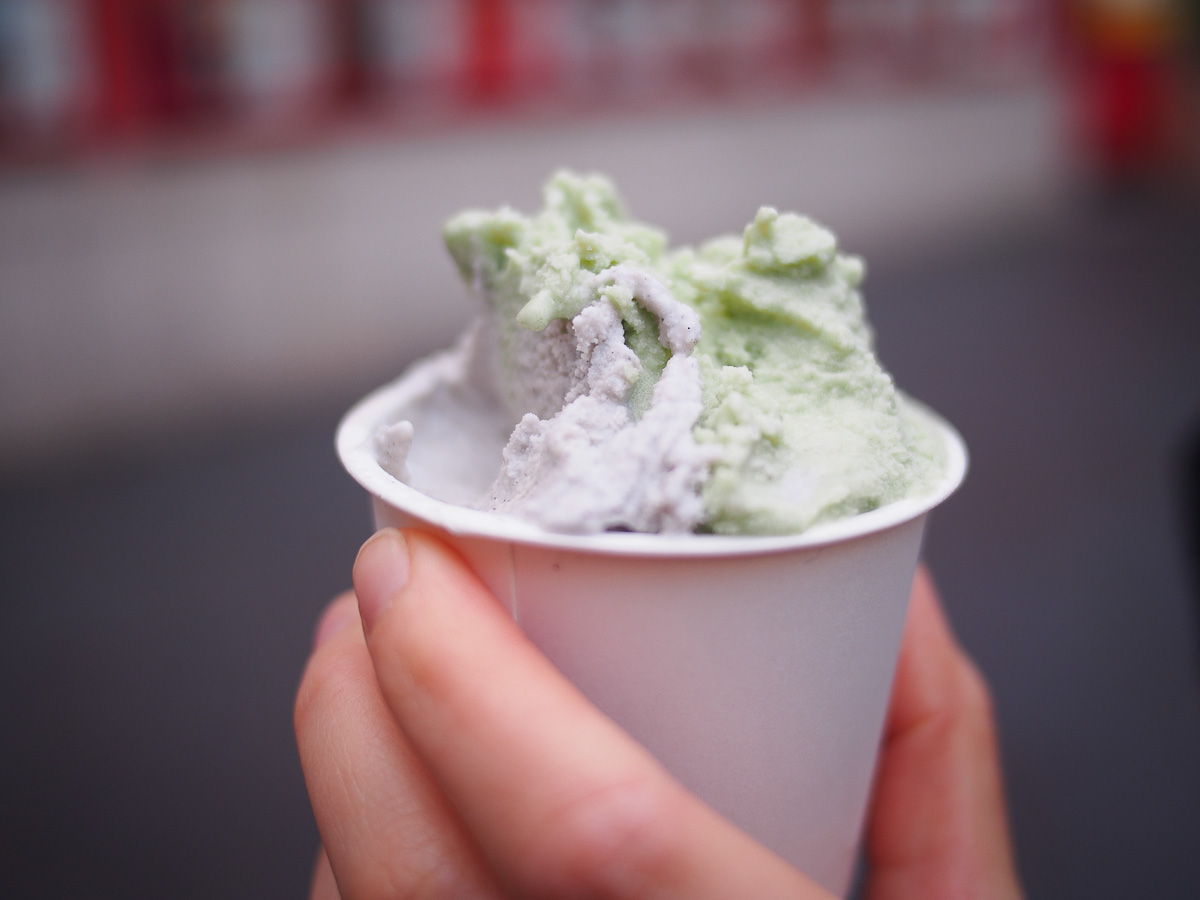 There was one store which advertised gelato, so it piqued our interest. They had all kinds of exotic flavors too. Among them were kurogoma (黒ゴマ, black sesam seed) and even bamboo! The bambo was especially tasty and not weird at all, actually. 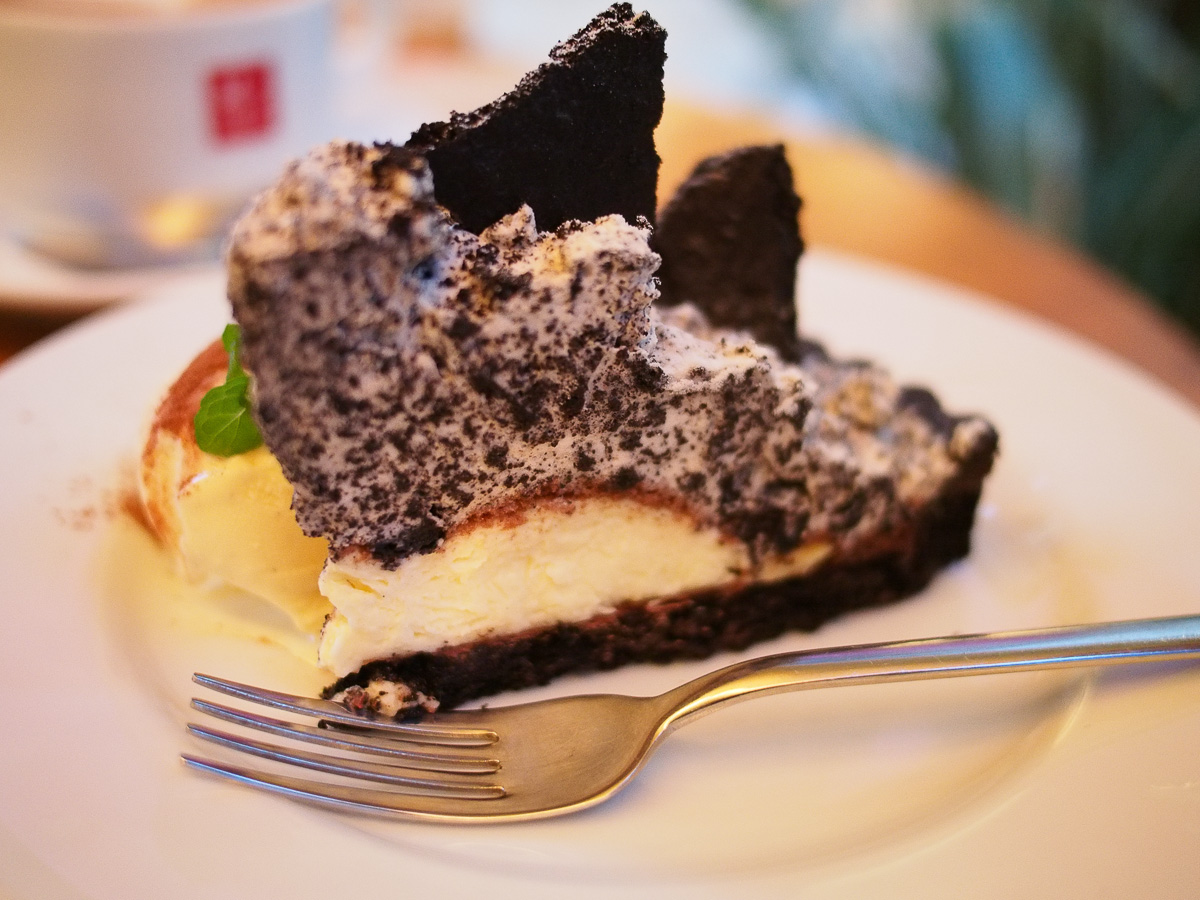 Later we went to a good cake cafe, which had a terrace. There are very few terraces in Japan (maybe because the roads are so narrow), so it was a nice find. The cake was cookie and cream flavor, and it was really tasty! 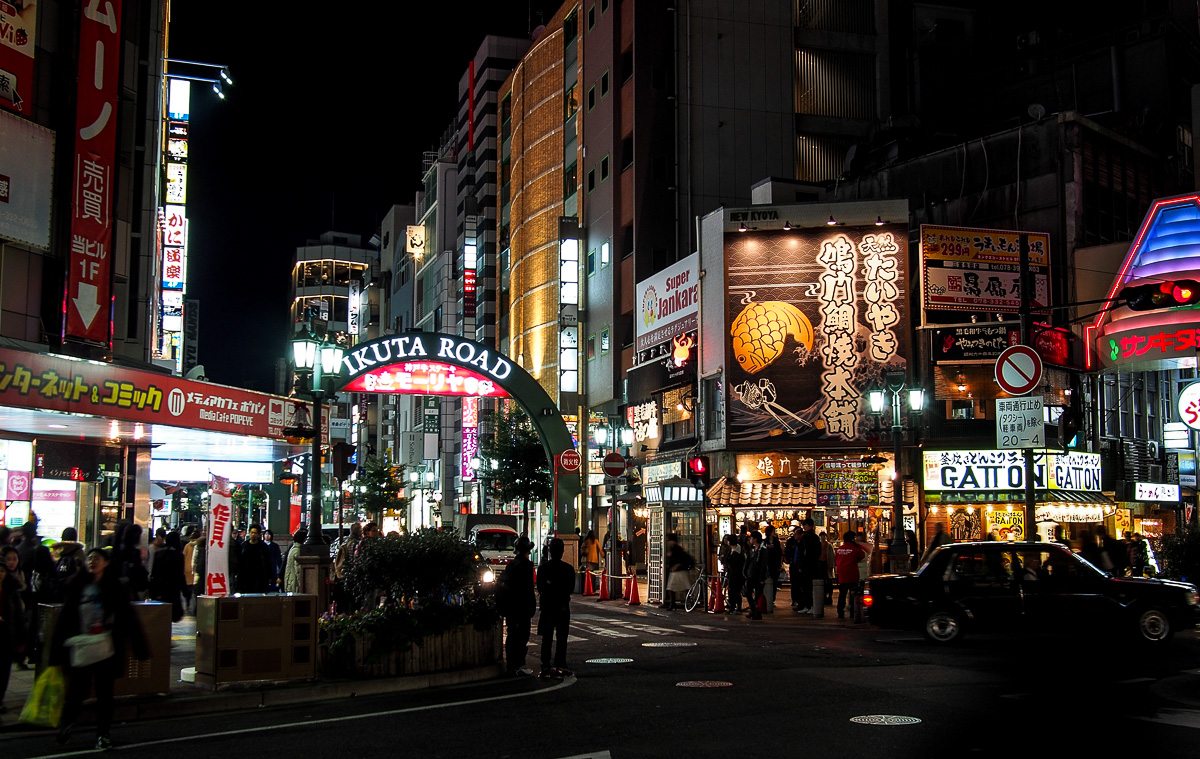 Kobe really lights up at night. There must be hundreds of bars, and I saw some of the shadiest looking alleys and bars when we explored the town a bit after the concert late at night. 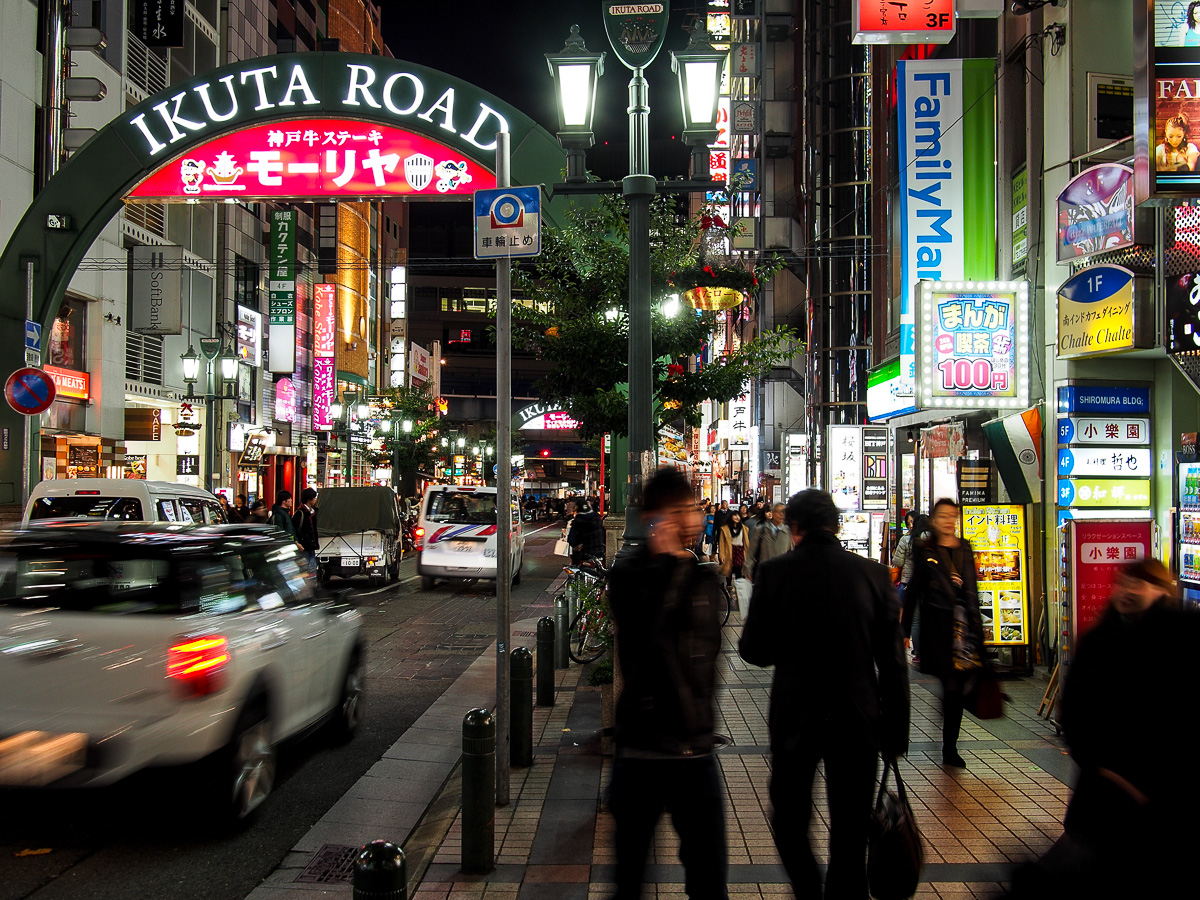 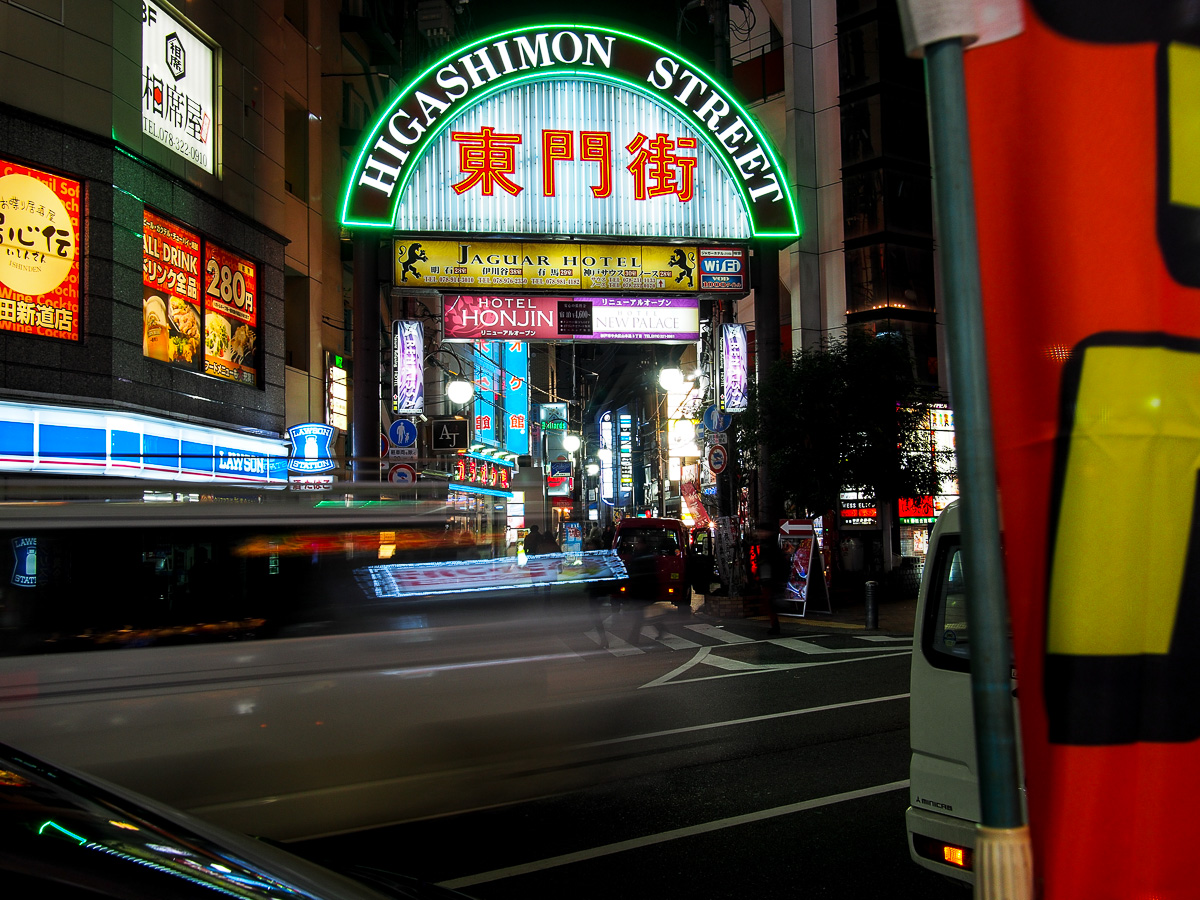 Some of the streets had huge signs like this. At least it’s easy to know where you are if you need to tell someone your location! When I was taking the photo, a car passed by so the reflection got captured nicely. 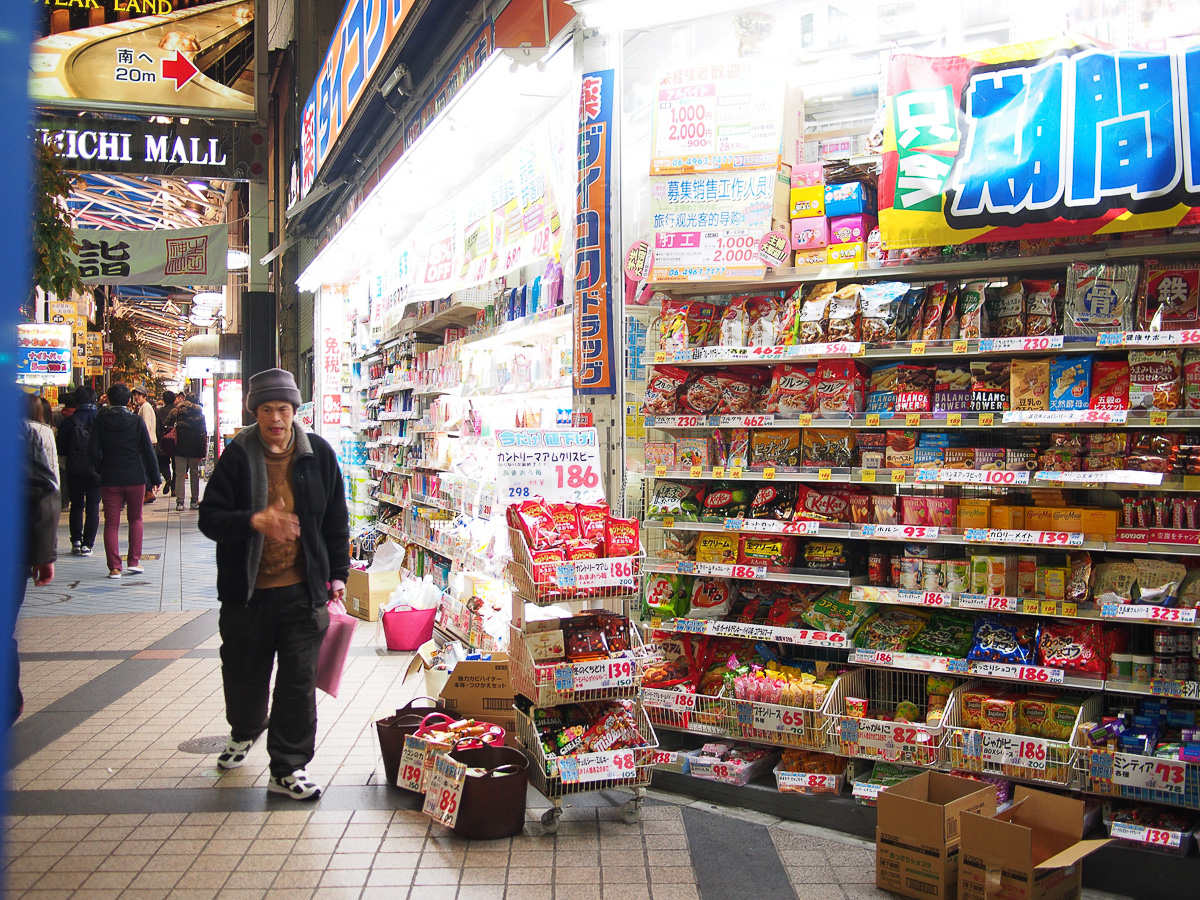 This drug store, or yakkyoku, is not so special in itself, but this one had the shelves towards the road so that you pick up something and then go inside the store to pay. Makes me wonder how often something gets stolen, but I guess it works?

In the end, it didn’t feel too christmasy in Kobe because it was really warm (about 15-20 degrees) but it was something different at least and the concert was great!